After only one year of travel, full-timing in an RV has become a way of life. We never know what we will find or where our next adventure will take us, as we make our way to an RV rally in Vermont for the end of the month.

In this adventure, we leave Canada and return to the U.S., making our way to western New York, to see one of the most beautiful parks in the country.

Since we had prepared so well for our customs crossing into Canada, it only took us a short time to get ready to come back to the U.S. We did go to the U.S. Customs website to check to see what we could/could not bring through customs (or, in other words, how much wine and cheese we could bring into the country or how much duty do we have to pay.) In one word our customs crossing into the United States was “uneventful!”

I have to admit my initial impression of this place wasn’t very good. Camping sites at Letchworth State Park have electricity, central water spigots on each loop (you can’t stay connected), and a central dump station for the entire park. This means we need to be very mindful of how much water we are using and must keep a close eye on all of our tank levels. However, this is just something we need to watch, what bothered me was that our site, as are most sites, was very un-level.

Our site was a back-in site that sloped down dramatically. When we first arrived, we went back to the check-in gate to see if they could change our site. They offered us another site to go check-out, but it was in a very tight location and backed up to what seemed like a frat group. Anyway to make a long story short, we kept our first site and a neighbor (from Maryland) saw us struggling to get level and came over and gave us another bag of leveling blocks. We drove head-in and elevated each of the front wheels 5 blocks, but we really could use 6 – oh, well, close enough.

We have met so many amazing people during our travels – just like these people from Maryland, who saw us struggling and just came over and helped us. We are blessed and will continue to pay it forward whenever we see anyone we can help.

Letchworth State Park is the “Grand Canyon of the East”:

Letchworth State Park is located in the western portion of New York State near the town of Castile. It is known as the “Grand Canyon of the East,” because it is one of the most beautiful areas in the eastern United States. The canyon gorge was carved out by the Genesee River and has dramatic cliffs (as high as 600 feet in some places), 3 popular waterfalls, 24 lesser-known waterfalls (with drops from 13′-500′), and is surrounded by lush forests.

The Most Popular Falls at Letchworth State Park: 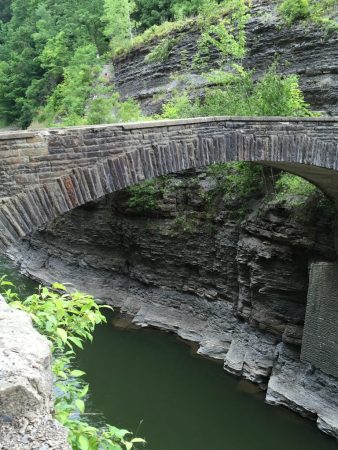 The Lower Falls are located on the west side of Letchworth State Park and have a 70 foot drop and a 300 foot crest. They can be seen from the Foot Bridge Trail near the Octagon Area parking lot. There are two trails to the Falls, an easy overlook trail and one with a staircase descending into the gorge that you follow for the best view of the falls. 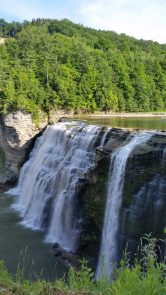 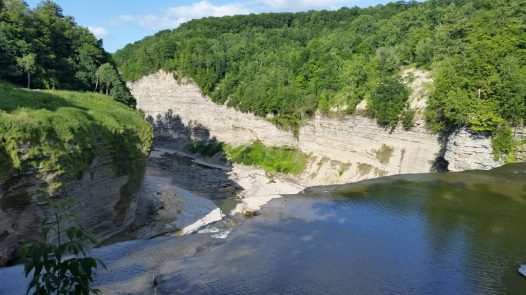 The Middle Falls are located on the west side of Letchworth State Park, have a 107 foot drop, a rather straight crest which is roughly 285 feet wide, and are illuminated after dark from May through October. The Middle Falls are the most impressive of the three falls. These Falls can be seen from the Glen Iris Inn and the Gorge Trail just below the Inn. 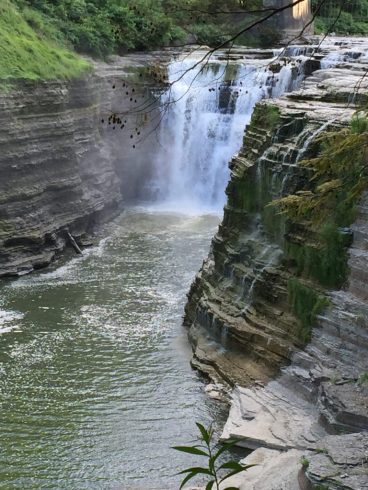 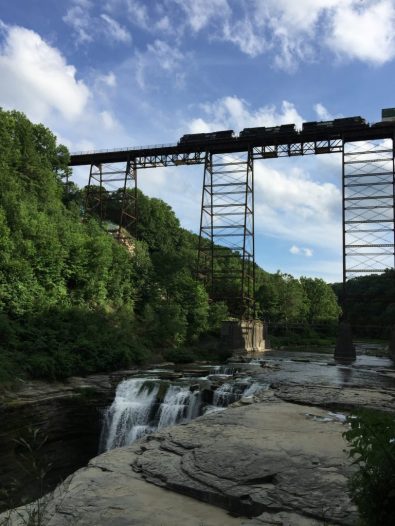 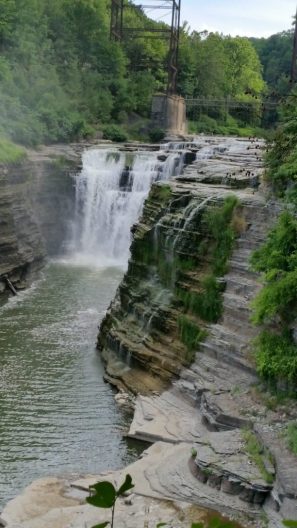 The Upper Falls are located on the west side of Letchworth State Park and have a 70 foot drop, a curving horseshoe-shaped crest that is roughly 300 feet wide, and faces northeast. These falls can be seen by taking a short walk to the southwest on the Gorge Trail, from the southernmost Falls Area parking lot.

In our pictures you can see the 675 foot long Erie Railroad High Bridge, which is 234 feet above the Genesee River and 400 feet upstream of the Upper Falls. (I love numbers and trains)

Some of the Other Falls in the Park:

For coordinates and descriptions of other waterfalls check out Letchworth State Park waterfall maps. 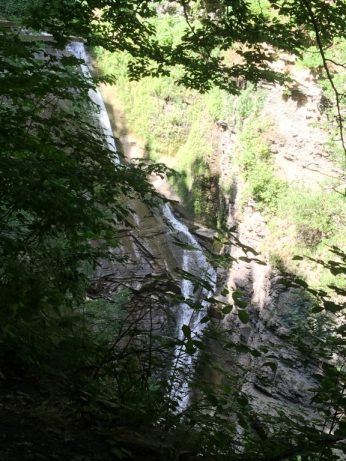 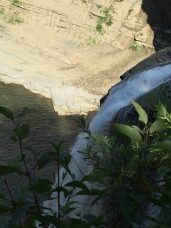 This is the best central vantage point in the park because it has a view of the gorge of the Genesee River, the Middle Falls, and the Upper Falls.  We also heard at a lecture at the Nature Center that it is at this overlook that many of the townspeople got engaged to be married.  Well, my sweet husband surprised me and got down on one knee and asked me if I would marry him all over again – of course I would, because it was the best decision I ever made. 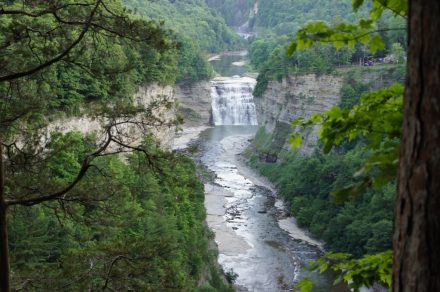 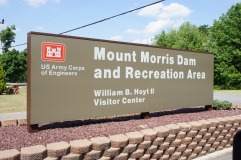 We couldn’t go to this area without taking the “dam” tour. (Sorry, I still have elementary school humor.) We usually stay at a lot of COE parks and have been taking tours of dams all over the United States during our travels so we were eager to see how this dam was different from others we have seen. 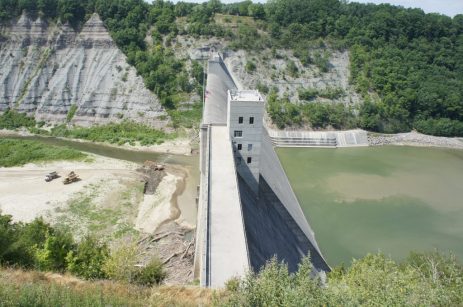 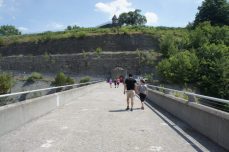 Downstream from the dam 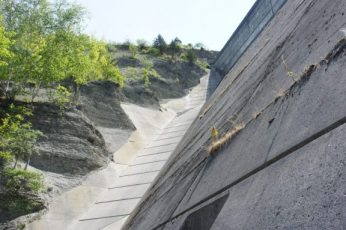 Can you see the turtles?

Inside Letchworth State Park the Corp of Engineers operates a dam and provides a Dam Visitor’s Center with a short film on the making of the dam, and a free ranger-led walking tour of the inside/outside of the dam. Tours are given everyday.

From our tour we learned:

Hikers have over 66 miles of hiking trails. Trails are also available for horseback riding, biking, snowmobiling and cross-country skiing. Letchworth offers nature, history and performing arts programs, guided walks, tours, a summer lecture series, whitewater rafting, kayaking, 2 pools for swimming (only 1 was open when we were there) and hot air ballooning. 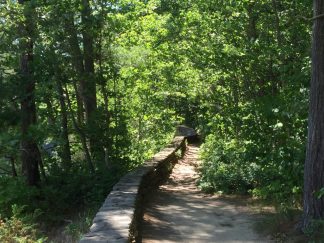 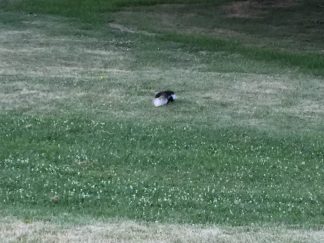 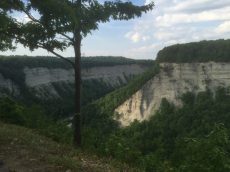 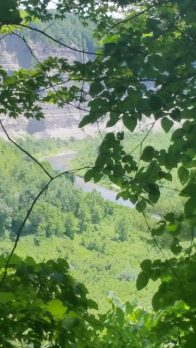 Things To Do Near the Park:

We searched for a Farm Store but were unsuccessful so we began looking for a good Farmer’s Market to do our grocery shopping. We found the largest Farmers Market we’ve ever gone to in Rochester, New York about an hour from the park.

The Rochester Public Market was very crowded and had a Jamaican market type atmosphere. Goods were very cheap, but there was a whole range of quality. Some vendors were selling overstocked items from a warehouse, or clothing, household goods, giftware, etc. While other vendors sold vegetables from their farm or backyard garden. 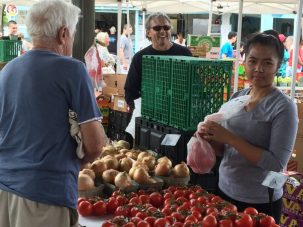 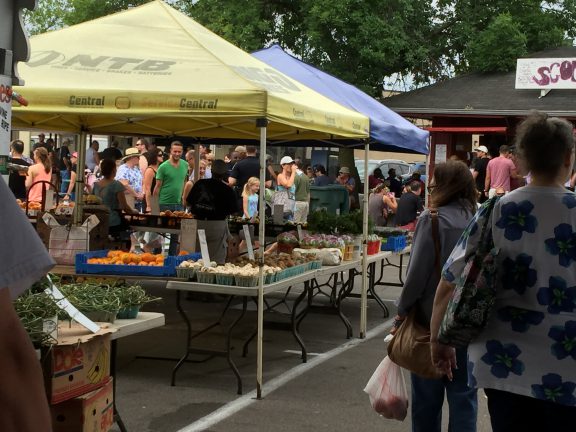 Produce was generally very high quality at very low prices. Many small crates of veggies were being offered for sale for a $1 or $2, and an Amish farmer was selling free-range large eggs at $2.50 per dozen. There were fruits, vegetables, meats, fish, baked goods, cheeses, wines, spices, live chickens/rabbits, and a variety of other foods at the market. Organic produce was difficult to find but there was a good selection of organic meat and dairy products.

Every time we go to a Farmer’s Market we learn something new. This trip we found a farmer, Rick Austin, from the Heiden Valley Farms in Lyons, New York, which raises animals using the Joel Salatin pasture raised (grass-fed) meat model of animal field rotation using no hormones or antibiotics. He is a fifth generation farmer, was a wealth of information, and we were able to buy all of our meat products from him.

One of the first things we do when going to an area is to check out events happening and we were pleasantly surprised to find a vintage WWII and Korea era aircraft show – fighters, bombers and cargo planes. We both love walking around and getting an up-close look at the planes and talking to some of the pilots. We also love having the planes roaring overhead in simulated fights, aerial performances by military aircraft fighters, daring aerobatics, and fly-bys. 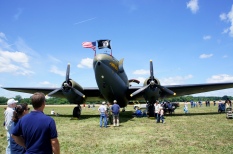 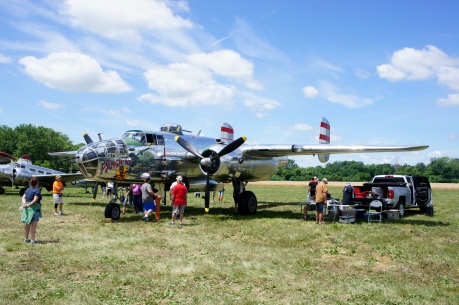 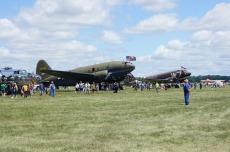 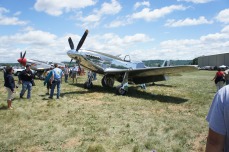 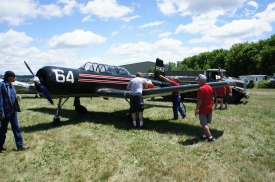 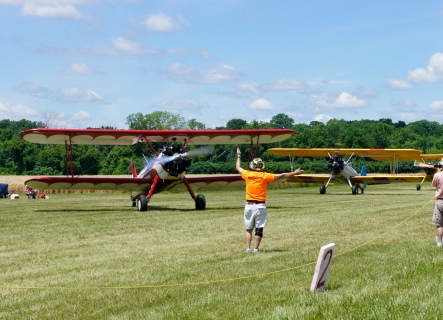 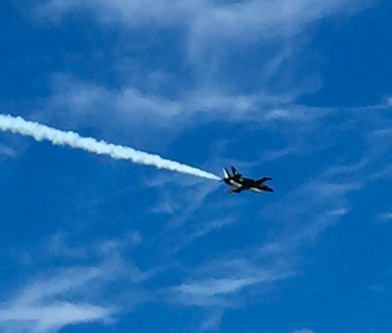 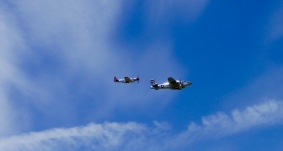 You may remember we attended the Hood River Fly-In last September in Oregon. One day we hope to make the Oshkosh Fly-In in Wisconsin, which is the largest one in the country with military, experimental, civilian, home-built, and other types of planes, but that will be for another time and another adventure. It’s time to say good-night for now …

*In April 2015, the park was voted the Best State Park in the country through a USA TODAY Reader’s Choice poll.