Well, it has been a year that we have been on the road as nomads, or perpetual travelers, two years since Don retired, and a year-and-a-half since I retired. That’s a lot of change but we would do it all over again in an instant. It has made us closer as a couple and more appreciative for the people in our lives. We are also so much calmer and more content.

When you travel full time you are no longer on vacation. This is something my brother-in-law Butch told us, but I don’t think I ever fully understood until now. When we go somewhere new we don’t feel like we need to see all the tourist sights and rush from here-to-there. Sometimes we just need to do regular chores (shop, wash, etc.), binge watch television during bad weather (Netflix is a traveler’s friend), or just hike around the park we are staying at the time, so we only pick a few sights to see. This is the way it was at our last stop which was at Warrior Creek Corp of Engineers Campground in Boomer, North Carolina. (It was really closer by road to Wilkesboro.)

Warrior Creek Corp of Engineers campground is one of several COEs and private campgrounds on W. Kerr Scott Lake. You may have noticed that we like staying at COEs. We like them because they generally have larger sites, are on or near waterways, and are laid back. Another reason some people like them is that if you are over 62 (we’re not there yet) they recognize the National Parks Pass so camping is very inexpensive. 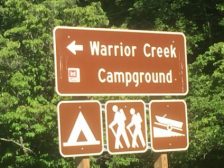 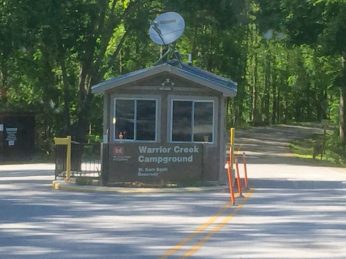 The Campground
Warrior Creek COE is located on a 1,475 acre lake, has a boat ramp, amphitheater, 6 tent sites with 110V/water and the best views of the lake in the campground, and 55 RV sites with electric/water in three loops. It also has 16 miles of mountain biking trails and is recognized by the International Biking Association as one the top bike trails in the world. 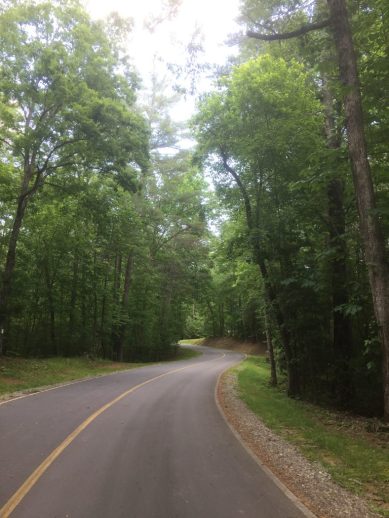 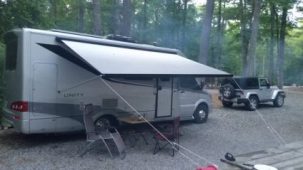 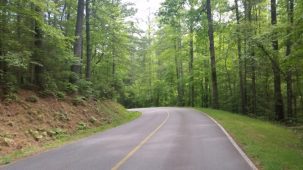 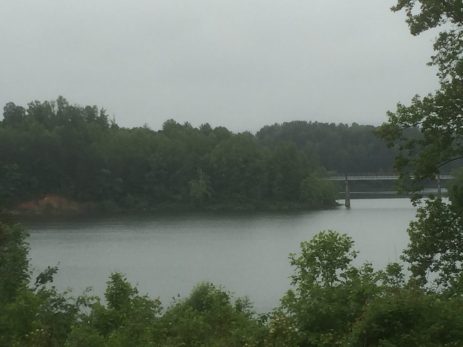 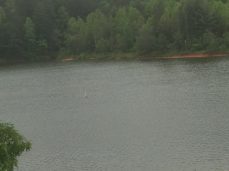 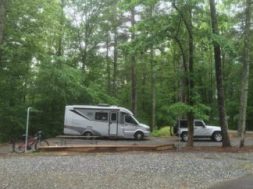 Everyday, Don and I would hike around the campground. The walking was often steep up-and-down the mountainside but we were determined to get at least 10,000 steps everyday. (Yes, I know we were getting at least 15,000 steps per day but that was when it was flat.) One day we decided to follow a closed road, thinking it would just loop around back to a road we knew in the park. Well, it didn’t quite work out that way and we ended up going out the park in a total different direction. Later we checked our phones to find out where we had been and went back to check it out in the jeep and then discovered a beautiful mountain overlook of our campground. 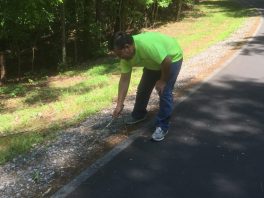 Hints for camping here: Only eighty percent of the sites are reservable so this leaves 20% for first-come-first-serve but weekends are crowded so plan on arriving during the week if you are coming without a reservation. The only RV sites near (walkable) a restroom are sites 7-21.  Warrior Creek is not as popular as Bandits Roost, another COE campground just down the road, so you might want to check it out, too.

Exploring the Nearby Towns and a few Attractions

Wilkesboro: A town struggling to survive. Lowe’s used to have their corporate office here and recently moved it to Charlotte and with it a lot of jobs from the area. While we were here an unflattering article came out in The New Yorker about the area and it was the talk of the hair salon I visited. (One day I need to write a blog entry about the various hair salons I’ve used and the experiences I’ve had getting my hair done on the road.) Wilkesboro was a great place to get our laundry done and catch up on various chores. One night they were having the “Rebels & Rednecks United Mower Racing Association – Lawn Mower Races” which sounded like fun but we decided we would rather hang around a campfire and our rv. (We know we are true nomads when we would rather just stay at our campsite while Don whittles on some walking sticks he found to improve their usability for hiking.) 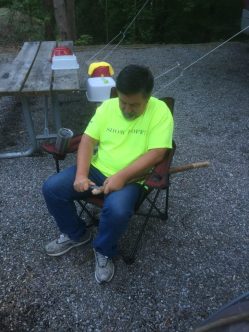 West Jefferson: This was a quaint little arts & crafts town with some great shops and a cheese factory. However, we had come here to visit their farmer’s market. Everywhere we go we like to visit the farmer’s market to try to find markets with organic or home grown vegetables, grass fed meats, and free roaming chicken eggs. (We are no longer vegan and are enjoying being meat-eaters again.) This town did not disappoint because at this market was the Highland Meadows Cattle Company with Scottish Highland Beef which are raised on free roaming pastures. If you are in the area this town is worth the drive and the farmer’s market is worth going to for a visit. It’s not the largest market we’ve been to but most of the booths were manned by farmers. Several of the farmer’s markets we have gone to didn’t have a farmer in sight and was more of a crafts market or flea market even though they called themselves a farmer’s market.

bratwurst and steaks from the market

Charlotte: We took a day trip to this town but didn’t know it was the NASCAR race day. The traffic was horrible but we did get to do some retail therapy and visit some of our favorite stores (Talbots, Whole Foods, Trader Joes, IKEA, etc.) we don’t usually get to visit in our travels.  We also continued our retail therapy towards the end of our trip in Winston-Salem, but it was just a quick grocery trip.

Blowing Rock: This is another quaint town with tree lined streets and great mountain views. It was named by Southern Living Magazine readers as a “Favorite Southern Destination” and is just beginning to pull out of an economic downfall it has been experiencing.

The Blowing Rock Attraction: Right outside the town of Blowing Rock sits an immense cliff 4,000 feet above sea level, overhanging John River Gorge 3,000 feet below. It is breathtaking and called Blowing Rock because the rocky walls of the gorge form a flume through which the northwest wind sweeps with such force that it returns a light object thrown over into the gorge. Ripley’s “Believe It Or Not’ even did a cartoon about it being the only place in the world where snow falls upside down. 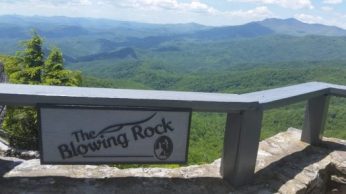 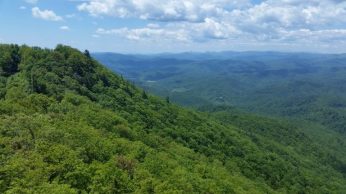 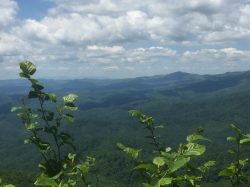 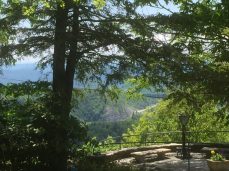 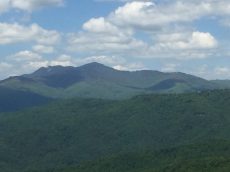 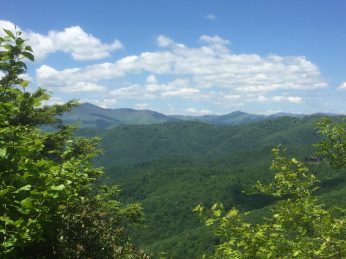 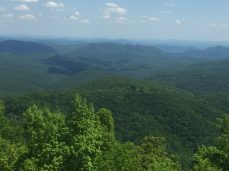 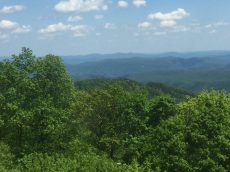 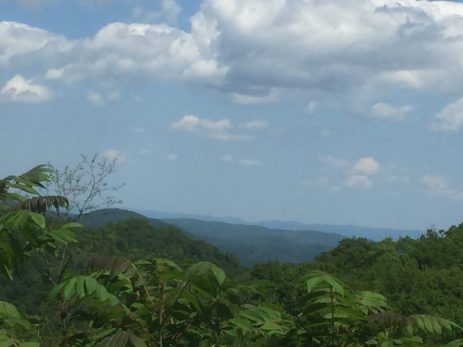 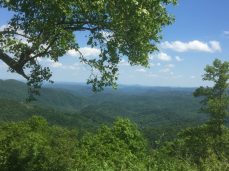 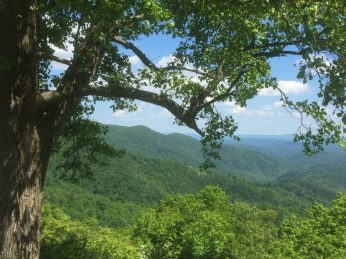 Blowing Rock Legend
It is said that a Chickasaw chieftan, fearful of a white man’s admiration for his lovely daughter, journeyed far from the plains to bring her to The Blowing Rock and the care of a squaw mother. One day the maiden, daydreaming on the craggy cliff, spied a Cherokee brave wandering in the wilderness far below and playfully shot an arrow in his direction. The flirtation worked because soon he appeared before her wigwam, courted her with songs of his land and they became lovers, wandering the pathless woodlands and along the crystal streams.

One day a strange reddening of the sky brought the brave and the maiden to The Blowing Rock. To him it was a sign of trouble commanding his return to his tribe in the plains. With the maiden’s entreaties not to leave her, the brave, torn by conflict of duty and heart, leaped from The Rock into the wilderness far below. The grief-stricken maiden prayed daily to the Great Spirit until one evening with a reddening sky, a gust of wind blew her lover back onto The Rock and into her arms. From that day a perpetual wind has blown up onto The Rock from the valley below. For people of other days, at least, this was explanation enough for The Blowing Rock’s mysterious winds causing even the snow to fall upside down.

Boone: This charming town is home to Appalachian State University and named after Daniel Boone. It is the highest elevation of any town its size east of the Mississippi. It has quaint shops and we really enjoyed visiting their Mast General Store and coffee shops. It is also near Grandfather Mountain with great hiking and outdoor activities and is on our bucket list for our next trip.

Blue Ridge Parkway: This is a National Parkway famous for its scenic beauty. It is America’s longest linear park, running for 469 miles, mostly along the Blue Ridge Mountains which are part of the Appalachian Mountains. It was built to connect Shenandoah National Park to the Great Smoky Mountains National Park. Words cannot do it justice so just enjoy the pictures we took. 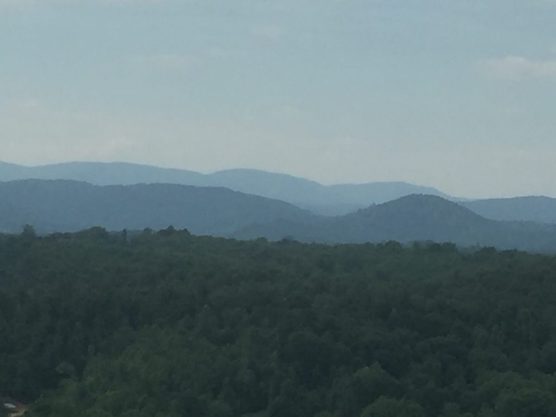 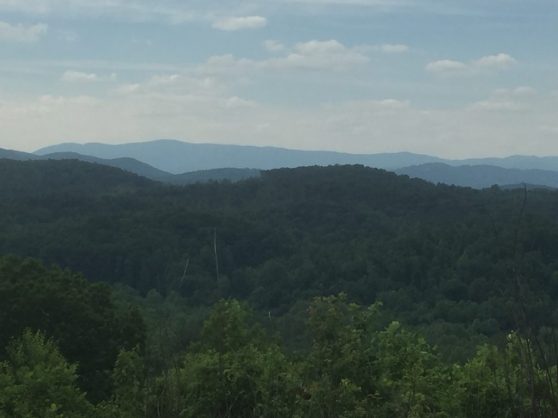