Leaving Coeur d’Alene when the wildfire warnings were extreme and the winds were picking up gave us a little comfort, but we still feel bad for all the communities that are affected. The Pacific Northwest is dry this summer and the wildfires are a huge threat. 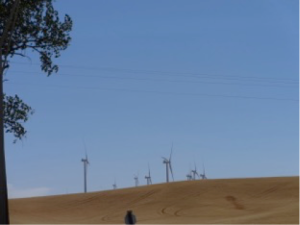 Wheat fields and windmills from a rest stop

After the short drive into Washington State and a little navigation glitch we arrived at our new site at Boyers RV Park & Marina. This is a US Army Corps of Engineers facility. Very nice.

It’s very different terrain from where we have been. We are on the edge of the Snake River just below the Lower Granite Dam. The surrounding rocky hills are very rugged, covered in dry grass and small bushes. The wildlife has changed to mainly mule deer, ospreys, owls & rattlesnakes.

After getting the campsite setup, I took off on the bike for a little exploring. There is a paved path that runs along the river, I took the path headed towards the dam.

When bicycle riding in this area, its wise to have thorn proof tires/tubes. The vegetation around here has thorns and burls that will quickly take out a bicycle tire.

So far we’ve had 2 flats. One tube could be patched – it only had 3 holes. On the other tire I stopped counting after I found 8 holes, just tossed that tube.

The dams are controversial – they provide flood control, irrigation, hydroelectric power and navigable waters… but the salmon runs have steadily declined since their construction. Washington State has demolished three older dams and restored the fish runs in the area we used to visit near Sequim.

We took a drive over the dam/lock to go to the visitor’s center. No photography allowed while on or in the dam, Homeland Security. This is a cool place to check out – an educational video presentation explains the geology of the area and the function of the dam, locks, and the fish bypass systems. There’s a thick glass window that allows you to see the juvenile fish swimming downstream through the bypass towards the ocean or the adult fish returning to spawn climbing the fish ladder (the fish can either climb the ladder or just swim underneath). There was a construction project in progress that will improve the fish bypass system.

We waited for the guided “hard hat” tour – this was a look at the inside of the dam, the big electrical generators, the massive overhead crane to service the generators & turbines, and all the internal passageways for the fish (salmon & steelhead). At the time of our visit, they were only operating one of the six generators. If all generator/turbines are in service, they can produce 810 megawatts. The tour guide explained that as more large-scale wind turbines produce power, they drop back with the dam’s hydroelectric output.

After taking the elevator back up to the top of the dam, we toured the lock and floodgates. We were lucky enough to be there when a boat was in the lock and saw the water level dropping and the downstream gates open. Very cool!

We always look for visitor’s information when we arrive at a new destination- either searching online or stopping by the chamber of commerce.

One thing that is of interest is the local farmers market. It’s always nice to get fresh fruit and veggies while supporting the locals. We wanted to go to the market in Pullman, but we had missed it on Wednesday. The only other market close by on a Saturday was in Moscow, Idaho. So we took off in the jeep for the 22-mile drive east.

We drove through Pullman to get to Moscow; Pullman was having their annual national Lentil festival. We could see the parade going by as we drove through.

Moscow has one of the largest markets that we’ve seen since being out west. There was a huge selection to choose from and a large turnout. The blues band playing had a good sound. We even found homemade lentil veggie tamales! 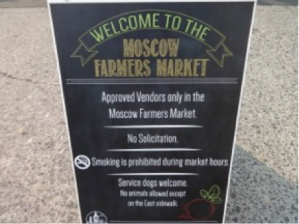 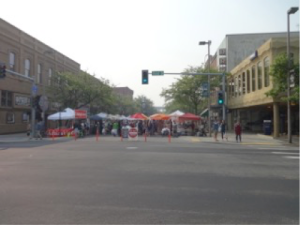 After the market we looked around for someplace to have brunch and discovered The Old European restaurant on our way back in Pullman. The spiced coffee and Danish aebelskivers was something new to try with a traditional breakfast. Overall, it was a great meal.

Arriving back at the park, the wind had switched directions with a cool front coming through. This dropped the temps but also brought in smoke from the wildfires again. We may have to rethink our overall plans, we can steer around the fires but the smoke is really affecting the air quality. 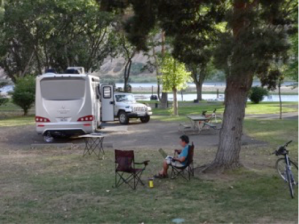 Till we meet again!